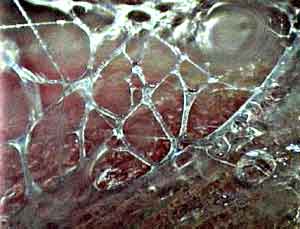 To understand Myofascial Release Therapy (MFR), we have to first understand the structure.

Our myofascial system exists to give us form and structure and to offer a layer of protection to aid healing, when needed. It has amazing tensile strength and is a connective tissue, strong in collagen fibres. The system is lubricated by a fluid called ground substance.

Day to day, the myofascia is giving us our form, finesse and support in our movement. It is nerve rich and has a good blood supply, therefore, it has a huge part to play in our movement patterns.

The ground substance is essentially a salty, watery lubricant- so when an area in our body comes under stress, trauma, injury, is incised or is repetitively restricted, the myofascial system switches into protective mode. The ground substance crystalises and the fibres coil up to form a super effective protective shield. Our bodies are just incredible! The myofascia forms this “shield” to restrict movement of the affected structures, in order that they can heal.

Fantastic! But what happens when we are done with the healing period and would like to restore intended function again? The theory goes, that once an area has healed, it will then be moving again – in turn, this movement will encourage movement through the myofascia, stimulating it to rehydrate and allow the fibres to slowly uncoil (or unwind).

The tricky times come when the restriction has been in place for a long period of time and the fibres have adhesed in place and need a little more encouragement than just rehydration and a little movement!

Or… the area that has been restricted is a very dense area of myofascia that doesn’t have such a great natural Range Of Motion to stimulate the unwinding of the fibres. I see this most commonly through the thoracolumbar fascia and down the IT Band.

Myofascial Release Therapy works to rehydrate the affected areas and unwind the fibres that are forming the restriction. It’s aim is to restore intended function to an area, by lengthening the fibres out again and allowing blood flow back to the structures beneath.

Essentially, our movement patterns are built around areas of restriction as well as our neural pathways and so the more of our body that we can keep lengthened and hydrated, the more influence we can have over our movement. This is exactly the reason that MFR is such an effective tool in rehabilitation. I use it daily to support horses and riders to form a more helpful and biomechanically healthy way of going.

I am a bit of a purist about my MFR! I use a direct therapy combined with myofascial stretching. The therapy itself is so gentle, it is a soft and light touch and works with the body in order to achieve a release. No force here! Which means that even people suffering hypersensitivity conditions, such as fibromyalgia and ME, can tolerate and benefit from this therapy.

Everyone experiences the release differently as it’s such an individual treatment, tapping into your bodies own experiences. For example, if you have formed a compensatory myofascial chain from weighting your right hip continually, you will have your own individual pattern of use. Often this will involve the left shoulder with a chain diagonally across your back to your right hip, sometimes across your lower back and pelvis and then down into your right IT band, which will in turn involve your right knee and likely your right ankle – could it be the right ankle that caused the need for compensation if no known injury has occurred to the left side? That’s for another day!

But the sensation from the release is a very individual thing. Some people have described it to me as a lovely warm rushy feeling, others describe some areas as feeling like pins and needles, others say it’s numb and then warm. The first time that I had MFR, I think I must have been very dehydrated in my body, it felt like popping candy over the area followed by this beautiful, warming and comforting rushing feeling.

It’s literally a therapy that can be beneficial for all and carries very few contraindications as it doesn’t stimulate the lymphatic system in the same way that a more traditional massage would.

It’s such a treat for me to be able to support my clients in this hugely effective and non-confrontational way. Everyone needs to experience this for themselves!

If you are after the magic touch you can find Emily Spry @ Integrated Bodyworks.

Emily is a Holistic Bodyworker, specialising in Myofascial Release Therapy and Cranial Sacral Therapy for horse and rider.